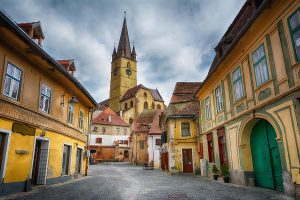 The 2012 SRS Conference was organized in the beautiful city of Sibiu, Romania.

The meeting was itself an example of the conference topic “Globalization and Europeanization: Romanians in Their Region and the World.” It brought together upwards of 200 participants from Romania, Moldova, many other European countries, North America and even Australia in a city that has been at the cross-roads of multi-cultural encounters for centuries. Given the theme chosen for the conference, we could hardly have chosen a more suitable place. All went splendidly in this recent European Cultural Capital in spite of the brutal heat wave (95 degree and 95 percent humidity was the rule) and of the political crisis in Romania.

The Romanian Cultural Institute (ICR) in Bucharest and its Chişinău branch, our institutional partners, had offered SRS generous financing for conference expenses but this did not come to pass because of leadership changes. The Cultural Section of the United States Embassy in Bucharest helped us pay for other costs. ICR staff, in particular Oana Suciu and Dana Berdilă, helped me with preparations and publicity and joined us in Sibiu.

Many thanks to both ICRs, and to Ms. Edwina Sagitto and her able staff at the Cultural Section of the Embassy.  Thanks also to Rodica Mihăilă, the newly appointed Executive Director of the Fulbright Commission in Bucharest, who organized a very successful round-table on Romanian-American exchanges as soon as she had taken her new position.

Without the warm welcome and hard work of Professor Alexandra Mitrea, Dean of the Faculty of Arts and Letters at University Lucian Blaga in Sibiu, and of her colleagues on the local organizing committee our conference would have been much poorer if not impossible. They organized registration, classrooms, catering, and much more. Thanks to their efforts and connections all of us at the conference had the pleasure of toasting champagne at the Sibiu Primărie with the city’s mayor and possibly the most popular politician in Romania at the time, Klaus Iohannis.

Besides reaching out to all scholars who work on Romania and Moldova, wherever they may be in our call for papers, SRS made a special effort to include U.S. based literary scholars whose traditional “home” has been in the Romanian Studies Association of America (RSAA). This proved very fruitful. Our last (but certainly not least) thanks go to all the participants on panels and round-tables—too many to name—and to the keynote speakers—Bogdan Murgescu, Tom Gallagher and Igor Caşu.

The conference was a chance to meet for the first time and engage with many new SRS members and see old friends. Younger scholars were well represented at the conference along with Romanian Studies veterans, and those in mid-career.