Category Archives: What we do

About the Book Series

The Society for Romanian Studies (SRS), the world’s premier academic organization dedicated to the advancement of Romanian Studies, and Polirom, Romania’s largest publisher of academic titles, have partnered to launch a book series, Studii Româneşti/Romanian Studies/Études Roumaines/Rumänische Studien. We publish scholarly books in Romanian or Romanian translation authored or edited by SRS members.

We are currently accepting three types of manuscripts:

Book proposals should deal with Romania and/or Moldova and the populations living on their territories or with the Romanian and Moldovan diasporas and cultures and have primarily an academic profile.  Contributions may have a disciplinary, interdisciplinary or multidisciplinary focus, drawing on history, political science, sociology, anthropology, law, economics, linguistics, literature, art history, and other fields. All manuscripts and books that are submitted will undergo a rigorous review process.

Further information on how to submit a book proposal is available below.  For inquiries and suggestions, please contact either the series editors or members of the Advisory Board.

For further inquiries, and suggestions please contact the series editors, the series consultant, or the members of the Advisory Board.

About the Book Series

The Society for Romanian Studies maintains close ties with a number of other scholarly organizations. Chief among them is the Association for Slavic, East European and Eurasian Studies (ASEEES), which every November organizes an annual meeting that is well attended by SRS members.

The other organizations with which the SRS maintains links are listed below, together with the SRS liaisons:

The SRS-Polirom Romanian Studies series has a number of translations and original manuscripts under consideration. The following titles are scheduled to be published in 2016: 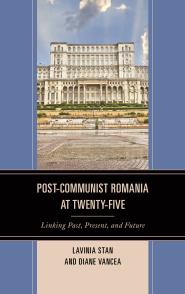 2014 marked the 25th anniversary of the collapse of communist regimes in Eastern Europe. The events of 1989 are widely seen as having ushered in new all-encompassing reforms in almost all areas of life. In few other places were reforms more contested and divisive than in Romania, a country that suffered greatly under the sultanistic-cum-totalitarian dictatorship of Nicolae Ceausescu, faced the region’s only bloody anti-communist revolt, and as such had the longest to travel on the road from communism to democracy. We now have a generation’s worth of experience with these wrenching reforms that have deeply affected Romania’s political institutions and political culture, and ultimately allowed it to become a member of the coveted European Union club. This volume gathers key lessons for democratic theory and practice from Romania’s first twenty-five years of post-communist transformation. Written by leading experts in the field of Romanian Studies, the chapters focus on the most important factors that have shaped the country’s political transformation since 1989.

What people are saying about it:

This new book … brings together timely contributions from younger and more established scholars from two continents that shed fresh light on the evolution of the fledgling Romanian democracy after 1989. It reminds us that Romania’s image and transition to democracy must be linked to the absence of market reforms and the lack of a vibrant civil society under communism. The book also demonstrates that the rapid proliferation of political parties after December 1989 brought about a weak form of pluralism that was not conducive to genuine political competition. The new political parties had weak constituencies, little grass-roots support, and lacked well-defined doctrines and internal discipline. The volume also points out several directions in which Romania must still make progress in order to catch up with its neighbors in the West. It will be of interest to political scientists, sociologists, and historians as well as to those studying Eastern Europe and transitions to democracy.

This timely volume marks the 25th anniversary of the collapse of the communist regime in Romania and explores the evolution of Romanian democracy by addressing the social and institutional development of the country since 1989. The editors have selected key themes which guide us on Romania’s democratic journey, and the contributors to the volume are some of the best scholars on Romania, providing important insights to the country’s political transformation. For anyone interested in understanding Romania’s democratic transition and the role that state, non-state and international actors have played, this is a must read.

Heroes and Victims explores the cultural power of war memorials in 20th-century Romania through two world wars and a succession of radical political changes—from attempts to create pluralist democratic political institutions after World War I to shifts toward authoritarian rule in the 1930s, to military dictatorships and Nazi occupation, to communist dictatorships, and finally to pluralist democracies with populist tendencies. Examining the interplay of centrally articulated and locally developed commemorations, Maria Bucur’s study engages monumental sites of memory, local funerary markers, rituals, and street names as well as autobiographical writings, novels, oral narratives, and film. This book reveals the ways in which a community’s religious, ethnic, economic, regional, and gender traditions shaped local efforts at memorializing its war dead. Maria Bucur is John W. Hill Chair in East European History and Associate Professor of History at Indiana University Bloomington. She is author of Eugenics and Modernization in Interwar Romania and editor (with Nancy M. Wingfield) of Gender and War in Twentieth-Century Eastern Europe (IUP, 2006).

“Heroes and Victims demonstrates not only how individual, local, and national discourses of remembrance have operated in the complex geopolitical and ethnic world of 20th-century Romania but also how and why post-communist Romanians and others in the 21st century have moved to a post-memory discourse.”

“An important book by one of the major emerging voices in east European studies.”

“[A] historical tour de force, compellingly written and powerfully demonstrated. . . . Bucur’s truly illuminating study explores the Romanians’ tortuously dramatic efforts to accomplish a long-delayed coming to terms with their past.”

“[Bucur] is to be congratulated on a superb piece of scholarship which both sheds light on existing questions and raises important new ones. As such it can be recommended to teachers and researchers alike.”

How do literacy and the development of literary culture promote the development of a national identity? This well-researched and readable book explores the rise of Romanian-language literary, educational and printing institutions in the eighteenth and nineteenth centuries, bringing out a story that has not been fully explored in English. He builds on and engages with current knowledge about print culture, modernization, national identity and state formation, to make an original contribution to ongoing debates in these areas. Alex Drace-Francis is an Associate Professor of Literary and Cultural History of Modern Europe at the University of Amsterdam.

“An enormously erudite study… [F]or anyone interested in the origins of modern Romanian literary production and education in the context of the Enlightenment, modernization, and state-formation this is an indispensable book.”

Irina Livezeanu, Journal of Balkan and Near Eastern Studies

“Alex Drace-Francis has produced a highly accurate and often outstandingly subtle piece of research. This British scholar observes things that his Romanian colleagues, being too familiar with them, have tended to gloss over”

“Solid and extremely well informed, Alex Drace-Francis’s book not only brings together a great mass of information and hypotheses, but also asks important questions about a cultural legacy whose investigation is still plagued by stereotypes.”

“Admirably balanced in its critical use of sources, perfectly mature in discussing a difficult topic, Drace-Francis’s book is an exceptionally insightful and stimulating analysis of emergent Romanian modernity and a model for future approaches.”

“Alex Drace-Francis has a knack of raising your intellectual game without leaving you fumbling for the ball. His occasional wit is dry but playful. If you know anyone who loves Romania enough to dig deep into its intellectual soil, the roots are here.”

A series of interviews with scholars of East-Central Europe

Devoted to the study of Romanian mythology & folklore